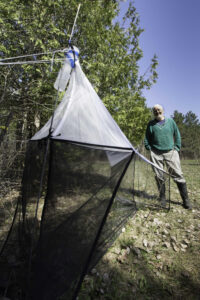 If you don’t know what’s there, how can you know when it changes? That is the goal of the insect monitoring project at High Lonesome Nature Reserve. Research scientists from Agriculture and Agri-food Canada’s Canadian National Collection of Insects and Arachnids (CNC), located at the Experimental Farm, have collected insect specimens from the area around Ottawa, in addition to the work they do on insect species from all over the world. By knowing the local species, they are able to follow trends – which ones are present that weren’t before, which species are gone that used to be common, or at least present. In general, they don’t expect to see anything really different from what they’ve seen before, but unless we look, it’s impossible to know.

We have a pretty good idea of the species of birds and mammals, snakes and turtles, and frogs and salamanders that are present. We have excellent records for many groups of plants that occur in Lanark County, and more specifically High Lonesome. There are still occasional surprises. But for some other groups of animals, plants and fungi, we barely know what’s here and we don’t know when something is unusual. And there are often no experts around to help us identify them. iNaturalist helps, but you’re unlikely to get a good photograph of a 2 mm beetle that lives in bracket fungi, or a parasitic wasp that lays its eggs in the eggs of gypsy moths!

I collected insect specimens weekly or bi-weekly from late May to early October using a single tent-like Malaise trap (see photograph) set up adjacent to one pond at High Lonesome. Malaise traps, constructed of fine mesh, typically capture large numbers (100s to 1000s) of flying insects over the course of a week in the middle of summer, with captured insects preserved in ethanol. I sorted a portion of most of these samples, removing particular groups of insects for which I knew there were interested specialists, and retaining the remainder in ethanol. These “residues” will be sorted and distributed to other specialists at the CNC for further study.

The species encountered varied dramatically in presence/absence and numbers over the season, often by orders of magnitude. Sawflies (relatives of wasps and bees that mostly feed on leaves as immatures) were numerous and highly diverse in the early part of the season, but almost absent late in the year. Deer and horse flies were captured in very large numbers in the middle of the year, as were mosquitoes. There was an impressive number of gypsy moths during an outbreak which lasted 2-3 weeks during the summer but this species was otherwise rare or absent. None of that would be any surprise to the visitors to High Lonesome who walked the trails.

However, some of the insects which were trapped are species that may not be familiar to most visitors to the property. For example, there are at least two species of scorpionflies (Merope tuber (Family Meropidae – the so-called earwig flies, named for the pincer like structures at the apex of the abdomen in males)) and Panorpa sp, (Family Panorpidae, in which males have a curled club-like structure at the end of the abdomen, vaguely reminiscent of a scorpion sting, but incapable of inflicting any damage). 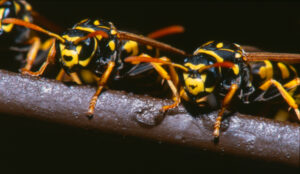 In late September, a single specimen of the European Hornet, Vespa crabro, was captured in the trap. These introduced wasps have been present in northeastern North America for over 160 years, and have expanded their range from the point of introduction, New York, very slowly over that time. Individuals have begun to appear in and around the Ottawa area, with several captured in Carleton Place, and a nest located near Dunrobin this summer.

We have no idea if these insects are unusual, rarer or more abundant than in the past because we simply don’t know for sure what was here. This is particularly true of groups that are small and less conspicuous, but may still have an impact out of all proportion to their size. Butterflies and large moths, dragonflies and damselflies and other large insects, like bumble bees and grasshoppers can often be identified from photographs with the resources now available. But the small things that eat the eggs of, say, a Brown Marmorated Stink Bug, or a Spotted Lanternfly, relatively new, and imported pests insects, are unknown to us.

As we begin to obtain a list of these lesser known species, and even some better known ones, we will have a better idea of which have disappeared from our region, like some native lady beetles displaced by their introduced relatives (the very common 7-spotted lady beetle or the multicoloured lady beetle). More isolated areas, less subject to development, like High Lonesome, may retain species with limited dispersal that have disappeared elsewhere. Other species that are new to our area, and High Lonesome, like the European Hornet, or Giant Swallowtails may have different types of effects on the original residents.

It is only if we know the current residents, undoubtedly already changed from the original fauna, that we will have an idea of how important reserves like this are to providing a refuge and maintaining the ecological processes which underly these animals and plants.