In late January 2014, MMLT finalized a conservation easement agreement with Paul and Cathy Keddy on their beautiful 530-acre property located in the northeastern corner of Drummond-North Elmsley Township.  The Keddys, both professional ecologists, first discovered this spectacular property back in the ‘70s, long before the area was designated a Provincially Significant Wetland Complex. Here follows Cathy’s account about their decision to legally protect their property forever.

“One of the first decisions we made when preparing for marriage back in 1976, when we were still students at Dalhousie University in Halifax, was to buy our first 100 acres of forest in Lanark County.  Many thought we were foolish.  But we had walked that property and seen 30 pairs of Great Blue Herons nesting in a wetland. How better to celebrate a marriage than to protect these magnificent creatures.  Over the years we camped and eventually built a small cabin where we spent many happy weekends.  As we got to know the property better, we found a stream that flowed to the east, and a patch of wild orchids in a seepage area.  We owned neither.  But over time, these properties came on the market, and we added them to our debt load.  Twice we could buy a property only after it had been logged.  This was painful, but we knew that whatever the short term damage, the trees would eventually regrow and wildlife habitat would recover.  The last property was the toughest, and we were able to buy it only after the landowner had quite deliberately increased the price and sold the logging rights, just to be spiteful.  The skidders were already felling huge beech trees as we signed the mortgage papers.  Paul’s parents very generously contributed $20,000 dollars so we could buy out the logging company before it felled the thirty acres having the oldest trees.  At this point we were the proud owners of a square mile.

Now there is a commitment.  Not only were we responsible for protecting the forest, and for making our monthly payments, but at home we had two growing children, while on the land we had populations of salamanders and frogs and warblers and turkey vultures.  What a family!  When Paul became ill in the early ‘90s, finances were stretched to the limit.

Eventually, our family moved to Louisiana for eight years where Paul earned enough money to pay off the accumulated debts. Now it was all ours!  But there would be little point in protecting 120-year-old-oaks or populations of wild orchids if the next owner would simply log them or create estate lots.  We were determined to pass it on intact.  The Nature Conservancy of Canada was interested, but by the time we returned from Louisiana there was a new local land conservancy on the scene, the Mississippi Madawaska Land Trust. We were delighted that they agreed to become partners, and take over from us in the long run. And 999 years, renewable, is indeed a long term arrangement! 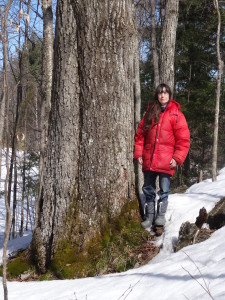 Each of us will die.  We know that when that happens to us, all the wild creatures we have known over the past 50 years will be safe from developers and loggers.  They will carry on their lives without us.  The 120-year-old-oaks and hemlocks will live several more centuries, and then, when they die, become homes for owls and hawks and tree frogs.  Yes, we could have sold the land, and burned through the money on expensive cars and luxury cruises.  But, we would have been no happier.  And, as they say, you can’t take it with you. What about our sons and the issue of inheritance?  The boys are thrilled that a property with so many happy memories will stay just the way they remember it.  Moreover, the easement agreement we signed leaves each of them the option to someday live on the edge of the property and enjoy it with their own families. And the salamanders and frogs and warblers and turtles and all the rest of the innumerable inhabitants, while they may not speak our language or understand land trusts, will be left alone to carry on their lives in relative peace.  We cannot think of a more satisfying conclusion to our lifetime project.”

To see some of the delights of this Nature Sanctuary, view our photo tour.

To read an interesting article about the Keddy’s and their donation, click on Ottawa Magazine Article by Moira Farr.

To read an update about spring 2016, click on the link for The Spring Frog Chorus