Clydelands – NOT OPEN to the Public

We are delighted to introduce you to our newest protected property, a one hundred acre wilderness in the northwest corner of Lanark Highlands. This land is among the most rugged, wild and natural in all of the county. It is traversed by the Middle Branch of Clyde Creek which flows through a broad rock strewn valley bounded on its sides by several 200 to 250 foot domed rocky hills with many near vertical cliffs. 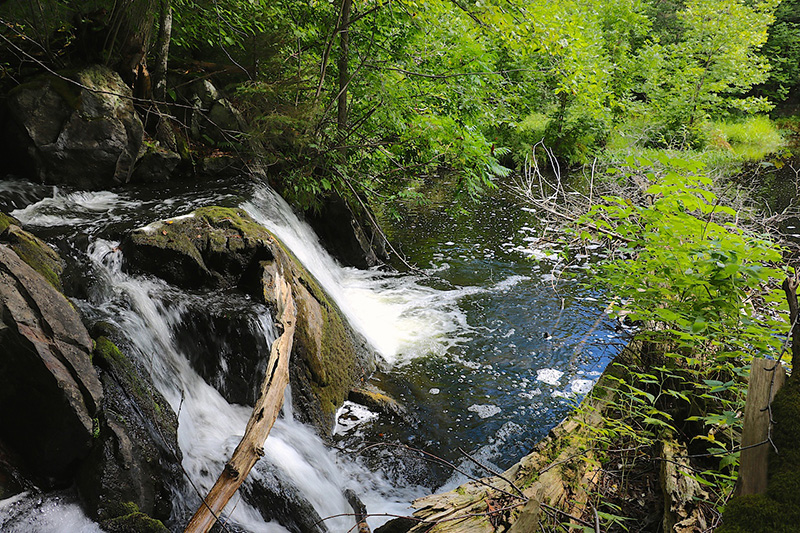 The property is being protected under an easement agreement by Gray and Aileen Merriam and according to their wishes will be left untouched forever. Gray and Aileen’s story about this lovely spot follows.

“We gained Clydelands in the early 70’s through a tax-delinquent properties auction by mail-bid. We also bought another 100 acres south of Joes Lake.

We didn’t know where Clydelands was except as a location on a 1:50,000 topographic map. That was enough to show that it was near the top end of the Clyde watershed and therefore was a valuable conservation holding. We had no map showing lots and concessions. So our early encounters were semi-annual expeditions to try to find our new lands. The Clerk of Lavant Township, Mr. Thomas Deachman, was most helpful in introducing us to his neighbours around Flower Station. They allowed us to explore cross-country from the north in our Land Rover. We got in as far as Lavant Long Lake with a canoe on the roof rack. That let us explore the lake down into the bay that gives rise to the Clyde and where the main stand of wild rice grew on the lake.

Each year our explorations would lead us to a new probable location for our unfound property. They were all interesting properties and it really did not matter whether we had found ours or not. The neighbours let us explore and camp and we enjoyed the country wherever we found ourselves.

One Thanksgiving weekend we were exploring up near Lavant Long Lake with four of us and a Labrador pup in a tent when an early snowstorm pushed the tent flat on top of us. A winter trip with a toboggan was greatly enjoyed by two young boys.

About that time we received a rather abrupt letter from the Ministry of Natural Resources concerning our other 100 acres south of Joes Lake. It stated quite bluntly that we better be careful if we intended to build anything on that property. If we built over the property line onto Crown land, the building would be removed and we would get a bill for the costs.

A few years later, another letter from MNR informed us that logging was to begin around Clydelands so we paraphrased their earlier letter and sent it back to them, warning against any cutting over the property lines onto Clydelands. This meant that MNR had to flag a line around Clydelands and we finally got an exact boundary for our property.

It turned out to be the nicest property of all those we had explored. It had the headwaters of the West Branch of the Clyde where it left Lavant Long Lake, and had some prominent domes of Precambrian rock from where you could see very far to the south. It had outstanding diversity of forest with many shrubs and forbes under the trees. We were very pleased.

By this time, our sons were in university. One day Paul joined us on an overnight up on Clydelands. We were in sleeping bags under a tarp but Paul had no tarp. It poured that night and when he headed off to Trent in the morning, he was dripping wet and a slight shade of blue.

Our stories of the hospitality of Thomas Deachman led Gray’s parents to visit him at Flower Station. They probably thought that they could drive to our new property. Despite never gaining access, Gray’s father left a request that his ashes be scattered at Clydelands. There now are two bronze plaques on the rocky outcrop that faces south, one for Arthur Reginald Merriam and one for Clara Ida Merriam. So Clydelands now has strong bonds with our family.”

Click on the link to take a photo tour of the property.